Original article from Megan at Couples Candy ... a great resource worth checking out! https://couplescandy.com/guides/bdsm/. The link also contains some great video resources.

Read on to find out how you can get in touch with your inner bad girl or boy!

Basically, it is a collection of sexual practices or fetishes that use control, pain, and restraints in order for both partners to achieve satisfaction.

Ancient Romans and ancient Greeks had terms for sexual activities that include bondage and spanking, with an illustrated advert for a female dominant’s services carefully picked out on the wall of a brothel in Pompeii, along with a pictorial menu-style list of other available – ahem – products and services!

The Kama Sutra, that ancient Indian text which is best known for its advice on the multitude of possible sexual positions but which is actually a guide book to living a complete and full life out of bed as well as it in, offers advice on four different types of spanking – obviously being naughty is a very human trait!

Many sexual practises were ignored by the medical and scientific community for centuries, with the generally accepted belief that what consenting adults get up to is their own business.

But it is one of the safer ways to have a sexual adventure should boredom with the plain and normal ever strike!

Because some of the activities indulged in can be dangerous, there is a culture of ‘safety first’ that has permeated almost every layer of the experience. In fact, for many dungeons, the catchphrase: ‘safe, sane, consensual’, is taken as seriously as a biblical commandment.

The opportunity to try out what might be considered to be risqué behaviours in a safe and anonymous (if so desired) environment can be a big draw to people who have never thought of indulging in such things.

Of course, there are also many people who are drawn to these more extreme preferences as it is simply in their nature to be. It is nothing to be ashamed of, nor to be proud of: our desires and preferences simply are what they are.

A Statistic For The Curious:

Twelve per cent of women and up to twenty-two per cent of men reported feeling a surge of lust, sexual curiosity, or even desire at hearing of or watching sadomasochistic play unfold.

On the contrary, you can take just one element of kink, as it is called, and add it to your normal routine – or you can go the whole hog and fully immerse yourself in Fifty Shades of Wow.

In these practises, there is often an imbalance between the partners: one likes being tied up and/ or spanked, the other enjoys doing the tying or the spanking – but what is crucial is that the actions, and the partnership, should always be consensual and informed.

Of course, there are always exceptions to this, and people who are new to the practise often try it out as a form of new and exciting foreplay. Bondage, specifically, refers to the physical restraint part, and can take the form of being tied up with ropes, handcuffed, or suspended in a constrained positions.

Often there is an aesthetic element to bondage: the body must be in a particular formation, or the ropes should make an attractive design – this is seen especially in Japanese Kinbaku, where the aesthetics of the session is one of the more important elements. Discipline is a little woollier and can take place even while not in each other’s company.

The more dominant partner – the one doing the disciplining – can make demands of the other partner such as: going without underwear, wearing fetish clothing under everyday clothing, performing certain actions at certain times, all while apparently having a normal work or leisure day.

More often, though, discipline is face-to-face, and happens during a session, often combined with bondage – hence the pairing of the terms, even though they can be quite separate from each other

The term is often portmanteaued to ‘sadomasochism’, and refers to the twin desires of wanting to hurt and wanting to be hurt. It must be stressed that masochists do not like just any pain, for example, suffering a broken leg or sprained wrist will not delight them any more than it would the man on the street.

No, the pain enjoyed by a masochist needs to be applied to a specific area of the body, under certain circumstances, and often needs to be inflicted by a unique instrument too.

This distinction can be hard to understand by someone who sees all pain as being unpleasant and to be avoided at all costs, but it is an important one to understand.

The pain inflicted and enjoyed during a sadomasochistic session will usually be agreed upon beforehand. People may desire the pain to be on a certain body part, or to be inflicted with a certain weapon, and it is a real connection when the masochist and the sadist both want the same thing! Or the opposite thing? You know what I mean!

Interest in sadomasochism can occur at any age. Men interested in S&M tend to have become interested in it before the age of eighteen or so, while women tend to get into later, in their twenties.

It is often said that the first sadomasochistic experience is the best, with all subsequent sessions merely attempts to live up to that first glorious time! So if you are about to have your first S&M playtime, be sure to enjoy every minute of the experience! 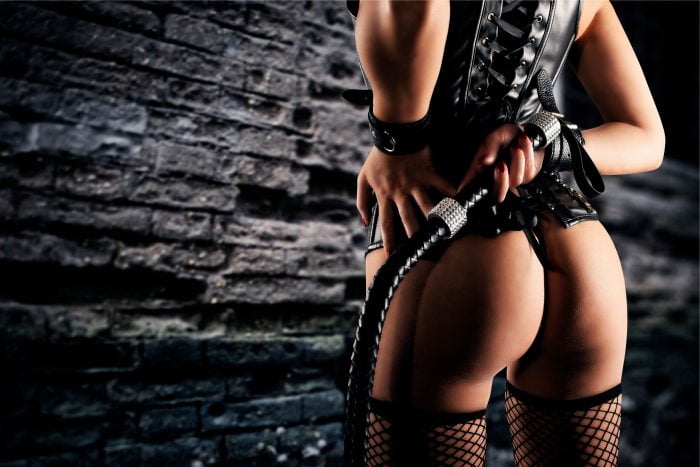 The dominated partner might have to wear the clothes the other tells them to, perform tasks – anything from the mundane, such as housework tasks, to the sensual, such as going to the shop wearing only a big coat. Of course, this could cause embarrassment to the sub, but that is part of the illicit thrill of such sessions.

Depending on what your particular kink is: bondage and discipline, sadomasochism or sub-dom, you may need certain tools or you may not need any at all.

Some sub-dom relationships use voice commands and occasional check-ins to ensure that the sub is being obedient to previously issued instructions, while some bondage or masochistic sessions might need a wide array of equipment.

On the other hand, you can spend a fortune, if so desired, installing your very own dungeon in your home, lining the walls with sound-proofing and kitting it out with whips, fine chains, gags, handcuffs and the best quality ropes and restraints that money can buy.

There are ranges of clothing to be worn during sessions, items made of latex or rubber, studded or not, and some with exciting cut-outs in them to allow ease of – ahem – access.

One caveat to using your own personal items: do not use items of great sentimental value! Sometimes knots tighten unexpectedly and cannot be untied. These might have to be cut through in the end to release your partner – occasionally without much notice if the rope is tied around a vulnerable area or if it is exerting too much pressure and beginning to cause harm. Which brings us neatly to the next section which deals with:

The safe word is usually a set of phrases or words with graduated meanings. The simplest set is the traffic light colours: green means ‘this is good, please continue’, amber or orange means ‘slow down’ or ‘ease up a bit’ or may simply indicate that things are progressing in a way that the partner (usually the sub) is not fully comfortable with, and red means, fairly obviously, ‘stop right now’.

For this reason, doms are encouraged to pay attention to their partner’s body language and incorporate welfare checks if their body language seems to change in any negative or withdrawing way. If you have such a scenario that might cause you to react, let your partner know in advance, so that any triggering actions can be avoided before it becomes a problem and ruins the session.

Doms should have a basic understanding of anatomy and physics, especially for situations that might border on dangerous to life. Subs tend to put all control in the hands of the doms and can even urge them to push beyond previously agreed upon boundaries. Doms must know how much further they can safely go, if at all, and be the responsible party, taking it upon themselves to say ‘no’ if necessary.

Another point to remember is that injuries and even scarring can happen during a session, depending on the activities being undertaken.

Basic first aid knowledge is always useful, but will be especially so if the activities that you like can cause minor injuries that will need prompt treatment.

If they are mildly interested you could broach the subject again, and ask them what would make them want to try out some things – or even what things they have always been interested in. The best route is to start small and, if they like it, build up from there, becoming more adventurous over time.

Always honour your agreement: if they use the safe word for stop, become too upset, or otherwise show that they have had enough, stop immediately and comfort them until they can resume, or leave it until another time – persisting will only reinforce whatever it is that has upset them and they will not trust you enough to try again.